Seb’s research interests are focused on understanding the circulation and dynamics in the open ocean, particularly in the Southern Ocean. As a Wallenberg Academy Fellow at the University of Gothenburg, Sweden, he is investigating the main physical processes of the upper ocean and how these impact both regional and global climate. He employs remotely sensed satellite data and in situ observations from gliders, ships and profiling floats in remote & harsh ocean environments to test novel hypotheses related to submesoscale features, upper ocean stratification and mixed layer processes. He was previously head of a national facility called the South African Marine Engineering & Robotics Centre between 2013-2016. This position spurred my activities in pioneering cutting-edge technology, namely gliders, to obtain high-resolution ocean observations that continue to this day. He is currently Co-Chair of the international Southern Ocean Observing System (SOOS). 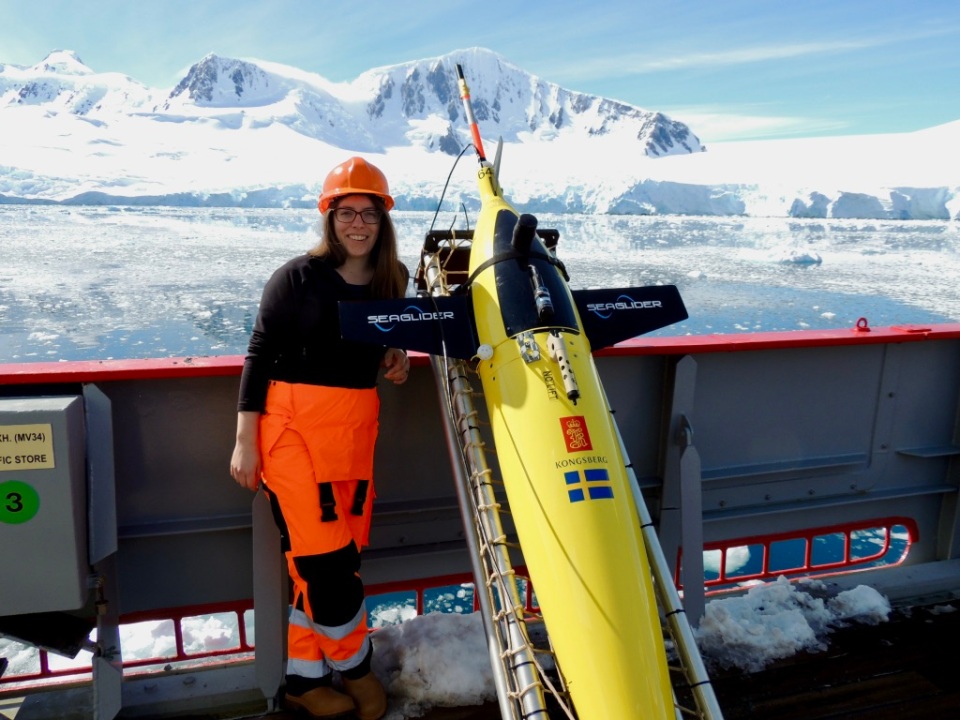 Louise is a researcher in the group at the University of Gothenburg. She is interested in understanding how freshwater fluxes can affect the upper ocean through mixing or stratification on submesoscales, using a combination of observations and simple ocean process models. Her research at the moment focuses on the marginal ice zone around the Greenwich Meridian, using seal data to extract valuable measurements of temperature and salinity from under the sea ice during winter. Louise also has experience using Seagliders to collect ocean observations: during ship-board operations, piloting and later analysis of the data. She is passionate about developing our current abilities for under ice observations (whether that’s glacial or sea ice)!

Marcel is post doctoral research fellow in the group at the University of Gothenburg, with ongoing collaborations with CSIR, S Africa. He has a particular interest in combining ocean observations and modeling to understand how lower atmospheric processes such as direct ocean heating/cooling and storms affect the surface ocean, eddies, currents, and mixing at the sub-mesoscales.

As one of the direct impacts of air-sea interactions at the sub-mesoscale is to change the upper ocean stratification, by either mixing or restratification, he is looking at multiple years of ocean glider datasets to elucidate what drives yearly differences in stratification. Data from profiling floats, shipboard measurements, and satellite observations are used to complement this analysis. These provide information on the lower atmosphere, sea surface and ocean interior, which contains the link between coupled ocean and atmospheric exchanges. Numerical modeling of these processes is done using the PWP 1-D, NEMO 3-D and idealised PSOM (Mahadevan, WHOI) models.

Martin is a PhD student at the University of Gothenburg under supervision of Seb Swart, Céline Heuzé and Helle Ploug. His main interests are upwelling processes in the ocean. Currently, he is researching the physical and biogeochemical processes and responses in the Weddell Sea Polynya.

He discovered his passion for geosciences with his Bachelor thesis about LIDAR measurements in the upper atmosphere. Specialising in oceanography and climate physics in his master studies at the University of Rostock, Martins master thesis is about the analytical modeling of upwelling systems and the response of the ecosystem. In his free time, he is either conquering the Swedish archipelago by kayak, or tinkering around with some software projects.

Isabelle is an explorer of the natural world, with an unquenchable thirst for learning – from earth system science to anthropology. She has worked in education and marine conservation, speaks five languages, and is a co-founder of LIMPET South Africa, a rocky shore youth citizen science program. Isabelle is currently doing a PhD, under the supervision of Sebastiaan Swart at the University of Gothenberg, Sweden and the co-supervision of Sarah Nicholson and Isabelle Ansorge at the CSIR and the University of Cape Town, respectively. Her work is focused on understanding submesoscale processes in the Marginal Ice Zone of the Southern Ocean.

Hanna is currently working on Saildrone data from the first autonomous Antarctic Circumnavigation to understand how the size of oceanic fronts effects the heat exchange between the ocean and the atmosphere.

Johan uses Seaglider and Wave Glider data to assess the impact of rainfall on upper ocean hydrography and circulation. He focuses on how large scale atmospheric rivers, transporting atmospheric moisture from as far as the Amazon rainforest, leads to large precipitation events over the Southern Ocean.

Icebreakers collecting meteorology and radiation data are being used by David to calculate bulk air-sea heat fluxes over the Southern Ocean. He will estimate the time-space scale at which they vary as well as assess how the heat fluxes vary over different regions (ACC, MIZ, subtropics).